“Dragging the shutter” is a technique in which you combine the stop-action of a flash with a slow shutter speed. The resulting image is one where you see motion blur PLUS a clearly defined subject….er sort of. This technique also calls into play another feature that your camera offers; First (or Front) Curtain Sync, and Second (or Rear) Curtain Sync. Before I get into all that, here is an image I took dragging the shutter: 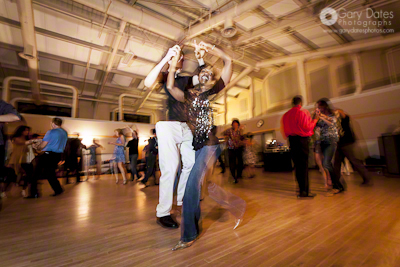 This is a highly stylized kind ofimage, and therefor not one that you’d take all the time. Plus, it is very much hit-or-miss, in that you’ll get many more useless shots than good ones…..at least that’s been my experience.

Flashes have a very short duration, meaning the amount of time that the light is “on” is usually around 1/1000 of a second, or even shorter if the flash output is less than full-power. That means if the flash is the ONLY light source, you can use it instead of the shutter to stop the action. Let’s say you set your camera’s exposure so you have a slow-ish shutter (say 1/2 second) and a small aperture, say @ f/22, so when you pop the shutter the resulting image is just a black frame. Let’s say you keep the same settings but this time add a flash, which will become the dominant (as in “only”) light source. Since that flash duration is very fast (@ 1/1000 of a second), it freezes motion.

So with the above scenario in mind, let’s say you shoot someone jumping. Since the only viable source of light comes from the flash, even with a slow shutter the resulting image will be stop-motion or freeze-frame because the camera can only “see” the subject for the duration of the flash. Once the flash ends, even though the shutter is still open, the sensor cannot “see” anything as there is no ambient light due to the ambient-cancelling exposure setting.

Using the above hypothetical scenario, let’s say instead of an ambient-light-cancelling f/stop setting of f/22, we instead use f/8…or f/5.6….or whatever. Since we’ve opened up the aperture MUCH wider, more light gets into the camera during that 1/2 second than before; enough light so we get ambient light influencing the scene. In fact, at f/5.6 we probably have enough light so if the flash DOESN’T fire we still get an image. Your on-camera light meter will tell you exactly how much ambient light is getting in (I usually set an ambient exposure of 1 stop under).

Obviously with a shutter speed of 1/2″, you are getting tons of motion blur, not only from the subject(s) you are shooting, but also from camera shake (assuming you are shooting hand-held). So any image thus shot will be, well, blurry! However, if we add the flash back into the mix, we’ll get an image that is both sharp AND blurry! Remember, the flash duration is very fast….at least 1/1000″ in most cases…..so the flash will stop the motion of any moving subject, and since the shutter stays open after the flash has died, it is still gathering light. In this way you get an image that is a combination of ambient plus flash.

For some bizarre reason that I cannot understand, all DSLRs are set with 1st curtain sync as the default. I recommend you set your camera to 2nd curtain sync and leave it there! When you are shooting at fast speeds you won’t see a difference, but when you are shooting at slow speeds and using a flash the blur will be behind the subject’s forward motion, not in front. You will have to go into your cameras manual and read how to set this. On Canon cameras, it is in the Custom Functions menu under Flash Control. I’m sure it is very similar for Nikon or any other make.

Here are a few examples using this technique. Click on the thumbnail to view a larger version of the image: 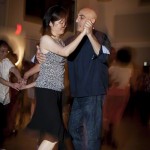 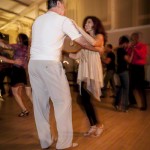 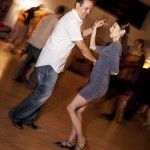 In all of the above shots, I used a shutter speed of somewhere between 1/8 and 1/4. Obviously I was shooting people dancing, which is a good time to drag the shutter. I think you’ll agree that the above shots not only better depict motion than a stop-action shot would have, but also have a certain energy thanks to the combination of slow shutter blur and stop-action flash. I should warn you, this takes some practice. I shot 3 different dances before I finally arrived at the best shutter-speed and flash strength combination. I can’t stress enough that you really have to experiment, because every situation is different. I’d suggest trying this technique out in different low-light scenarios. Shooting a band in a bar is a great place to try this, for just one example.