Know Where and What You’re Allowed to Shoot!

Photographer’s Rights are actually a big deal, especially given today’s paranoia and the 24-hour news cycle that causes the media to over-exaggerate just about everything for attention. Any of you who have been stopped by security or the police while out shooting already know this.

It happened to me when I was shooting for the following image: 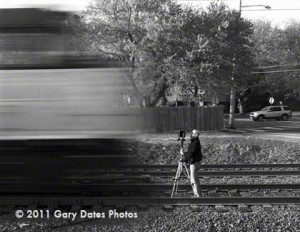 I was using a large=format 5×4 view camera, which is a huge beast requiring a hefty tripod. You can see it in the shot. I made 2 negatives; one of the train and the other of me standing on the tracks. I combined the 2 negs in the darkroom to create the composite. During the shoot, the police showed up and asked me what I was doing. The officer said that someone had called to complain about me shooting there!! I was on public property and wasn’t disturbing anyone.

At any rate, I explained to the officer that I was an artist and was shooting a creative project. He was pretty cool about it, but did say he would need to “call it in” and speak to the captain. Everything worked out fine and I was able to continue. My point however, is that MANY people have been stopped, harrassed, had their equipment confiscated, and sometimes even thrown in jail for doing exactly what I was doing!

Hence, below is a list of your photographer’s rights, clearly explaining what and where it is legal to shoot. You can copy/paste these into your smart phone or print them out. Either way, I recommend you have a copy with you so if you DO get harassed, you can at least be armed with the facts. Please note that this doesn’t mean you WON’T get harassed, have your gear confiscated, or even arrested, but at least you’ll know what the LAW is. Many police officers and security folks don’t, as bizarre as that seems.

These are general guidelines regarding the right to make photos and should not be interpreted as legal advice. If you need legal help, please contact a lawyer.

Thanks to PetaPixel for posting this info originally.