Shooting A Car For eBay

Shooting a car isn’t easy. It has lots of reflective surfaces, and is big…..too big to shoot indoors unless you have a huge studio space. My wife, Lucille, wanted to sell her 2006 Honda Civic on eBay, and needed a good exterior shot. As someone who almost always over-complicates things, my first thought was, “Uh oh, gotta hang a bedsheet in the driveway to act as a big softbox, get out by studio lights”…..you get the idea. Well, I wound up doing something really simple, with NO extra lighting (just the sun), and got a pretty good shot!

Here is the final side view (click photo for larger view): 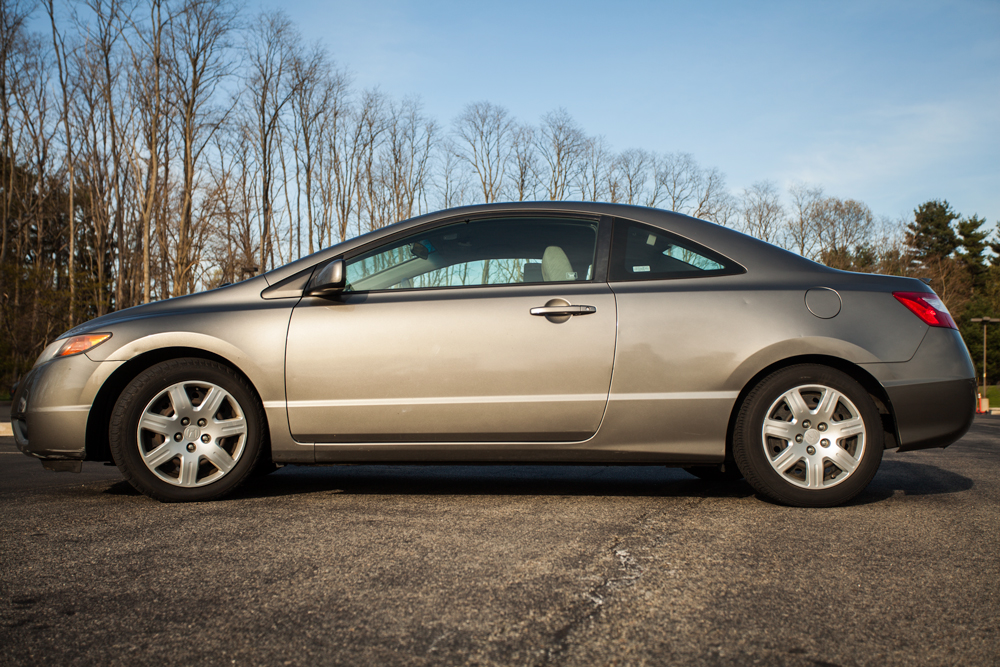 Right off the bat….wash the car!! Now, shoot the car either in the morning or evening when the sun is low in the sky. This will give you the best light overall, and also allow you to control the angle of light better. Secondly, and this is the part that saved me a ton of work, drive the car to a large parking lot!! Forget shooting it in your driveway. There are just too many distracting elements that take away from the car. THINK COMPOSITION and simplify your shot! This alone will get you a much better shot. In my case, we drove to the hospital right down the street. It was about 6:30 pm so the parking lot was fairly empty.

First off, you need to position the car so that the sun is lighting the side you want to feature. Forget backlighting and using a fill-flash blah blah blah. I’m sure you could get fancy with lights, but why bother? You are trying to sell a car, not impress everyone with your lighting skill. When positioning the car relative to the sun, pay attention to the background! Try to avoid having a lighting pole appearing behind the car so it looks like it’s sticking out of the roof. Also, make sure the car is a good distance away from any background trees or buildings so they don’t dominate the scene. Next, position YOURSELF so that the light from the sun is not creating a hot spot on the side of the car. Walk around a bit and see how the light plays on the car. You’ll soon find the best spot to shoot from.

I recommend shooting pretty wide. I shot the above image at @ 28mm on a full-frame camera. This does a few good things for you. Number one, it elongates the scene front-to-back so the background falls away and is much less distracting. Secondly, you’ll get a larger DoF at any f-stop. I think I was at f/8, and my focus was on the side of the car. Next, get LOW!! Don’t shoot from a standing position because you’ll be shooting slightly downward, getting a lot of vertical distortion shooting wide. Get down low and keep your camera level with the ground. Keeping the camera level eliminates any vertical distortion. The car will look in proportion and the background will appear to be further away than in actually is. Lastly, FILL THE FRAME! The shot is about the car, so get in tight and make it so!

I shot a front and rear view as well (click photo for larger view): 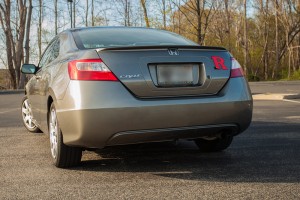 Lastly, you’ll want to include some interior shots as well. Lucille used her iPhone 5 for that. They came out fine. EBay recommends including around 12 photos. We used my 3 exterior shots and Lucille’s 9 interior iPhone shots.

The conclusion is pretty straight forward….the car sold the 1st day it went on eBay!!! It is totally worth making a little extra effort to get a good, clean exterior shot of your car. If the sun is low in the sky the light is at it’s best, and even a point & shoot could get a decent exposure!