It has become a cliche that buying more gear won’t make you a better photographer. This is definitely true. However, once you get to a certain point, which usually occurs around the time you get good at setting exposure manually, you begin to see the possibilities that open up with certain items. Below is a list of my favorite things that have helped me in my photography. The good news is that with one exception (Canon S90), they are all pretty inexpensive….as in less that $50, and in several cases, MUCH less!

I’ll start off with something REALLY inexpensive, but I love these things! They are AA/AAA battery cases by a company with an unfortunate name; Bug Eye Digital. Here’s a photo:

I have 6 cases all together; 3 for 3 sets of 4 AA batteries for my speedlights, and 3 for 3 sets of 4 AAA batteries for radio triggers. ONe cool feature is that they are marked in such a way that I can distinguish fully-charged batteries from those that aren’t. After a shoot, I can put the semi-spent batteries in the opposite way than what is embossed in the case. this way I know at a glance which batteries need charging…..simple but great! You can get a package of 6 from Amazon for an amazing 9.95! That’s @ $1.65/case! My only complaint is, well, Bug Eye Digital? Really? That’s the best name they could think of?

Next up, Step-Up rings! I love these things, because they work great and have saved me a ton-o-money in filters. Here’s what mine look like: 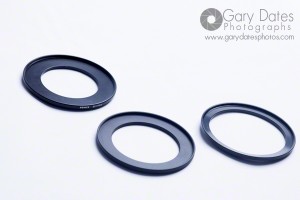 The idea is, you only buy circular filters, be they polarizers, NDs, whatever, for the LARGEST filter size lens you own. In my case, that would be 77mm. Then you can buy one step-up ring for each of your lenses. So in my case, I bought step-up rings in the following sizes; 52 to 77mm, 58mm to 77mm, and 67mm to 77mm. These rings allow me to use my 77mm filters on ANY lens I own. This is a huge savings, because step-up rings are under $10 each, whereas filters are MUCH more. For example, I own an 8-stop stop-down ND filter (another Favorite thing covered below). It costs around $150. No way could I afford one for each lens, so step-up rings solve that problem right quick and painless-like. Awesome! I got mine at B&H Photo.

OK, I hate camera straps. Many times I’m on a tripod, or shooting in my studio tethered to my computer. I don’t need this stupid, ugly strap hanging all over the place getting in the way. Plus, the idiotic straps that come with today’s cameras are designed to wear around your neck! Nothing says “weenie” better than wearing a camera strap around your neck so the camera flops around against your torso. However, when I’m on location its nice to hang the camera off a shoulder, or if I’m shooting in an urban setting its nice to know that no one can grab my expensive camera and run. Wouldn’t it be great if there was a camera strap that you could wear as a sling so the camera hangs at your side out of the way, that can attach to one of the side strap eyelets on the camera instead of the bottom female screw adapter made for tripods, was padded so it doesn’t dig into your shoulder, and was also easily removable? Enter the OP/TECH sling strap! It looks like this: 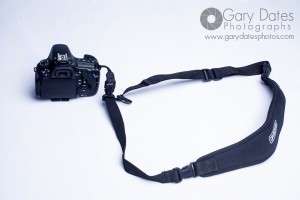 This strap is really comfortable and does everything mentioned above. The coolest part of all is that its literally a system! That means you can just buy the components you need to adapt ANY strap! For example, before I found this OP/TECH sling, I bought a BosStrap sling previously, which was OK in that it was also a sling strap so I could wear it across my chest and all, it was made to attach to the strap eyelet on my camera body, but it wasn’t easily removable. Well, I simply bought the 2 clips from OP/TECH for $6.95, attached the male clip to my camera and the female clip to this strap: 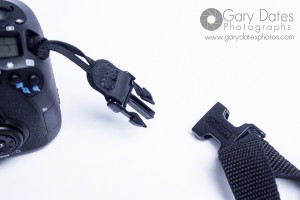 So now I have a strap for each of my camera bodies, and they are both removable! I can interchange the straps if I want as well. I LOVE IT!!! Best of all, the OP/TECH sling strap is only $19.95, including the clips!! The BosStrap sling I mentioned above was almost twice as much, wasn’t as comfortable cuz it wasn’t padded, and like I said, wasn’t easily removed…..until I added the OP/TECH clips. The OP/TECH system just ROCKS. I got mine here at Amazon.

OK, this is kind of a no-brainer, cuz ya gotta have a card in order to use the camera right? Plus, I haven’t tested all of the brands out there, so I cannot in all honesty say that SanDisk cards are the best. However, I CAN say that I have never had ANY issues with mine, and they just keep going! Transfers are fast and painless, and since both my Canon 5D MK2 and 60D shoot 1080 HD video, SanDisk cards can handle the throughput easily. For some reason, when Canon unveiled the 60D to replace the 50D, they decided to change from a CF card (pictured below) to to an SD card, so I use the SanDisk Ultra 16GB card in that body. No problems there either! 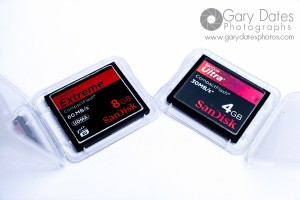 Camera cards are getting cheaper. I just bought the 8GB Extreme card above on Amazon for @ $29. For some perspective, I bought my 1st CF card (1GB) at Costco several years ago for @ $80! FYI, if you want to maximize the life/performance of your cards, don’t use them as storage devices! Transfer your photos to a a hard disk (or 2 for backup), and re-format the card IN YOUR CAMERA! Don’t delete the images using your computer, becasue you aren’t actually deleting them, you are just removing the PATH to them…they still remain on the card. One day, you’ll mount your card onto your computer and see a message that it is FULL, even though you can’t see any images. Also, I wouldn’t recommend formatting a card in one camera and then using it in another camera. Just sayin….. 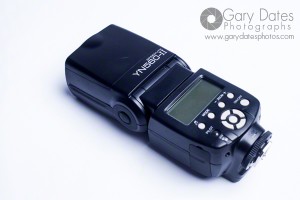 I rarely use speedlights on-camera. Generally, pointing an on-axis flash at your subject is just a bad idea. Therefor, getting the speedlight OFF the camera allows me to locate it anywhere on-set to create directional light. I use super-cheap radio trigger systems……@ $25 for this. The transmitter goes into the camera’s hotshoe, and the receiver goes on the flash, which again is NOT on the camera. The drawback is that I loose TTL communication between camera and flash, so the only signal that gets sent is the shutter opening to trigger the flash. As a result, I have to set my speedlight(s) manually.

All of the above is to explain why I love the YN 560-ll. It is a MANUALLY operated flash, so I set both output and zoom on the flash. Since I’m setting exposure in Manual mode anyway, this is no big deal. If all of this makes sense to you, then you’ll see why I love this flash….it sells for @ $70!! It has plenty of power/brightness and seems well-made. I got mine at Amazon. 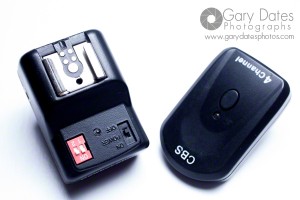 You can spend several hundred dollars on radio flash triggers. Pocket Wizard is the gold standard in this area, and deservedly so as pros swear by their stuff. But you’ll spend at least $300 to do what my Cowboy Studio NPT 04 radio trigger system does for @ $23! Sure, the build quality isn’t even close to PWs, but I have to say they’ve worked really well for me so far! For me its a no-brainer cuz I can’t afford Pocket Wizards. I got mine at, you guess it, Amazon.

What does a penlight have to do with photography? Well, a lot actually. Its no secret that all but the newest Canon cameras are pretty lousy in low light when it comes to auto focus. So my Streamlight Stylus Pro serves as a focus-assist beam. Also, its great for light painting! Last but not least, since it comes with a belt-holder pouch, I always have it with me. So if I’m shooting at night (often) it is invaluable, or really any time I need light. Once again, I got mine for @ $20 at Amazon. 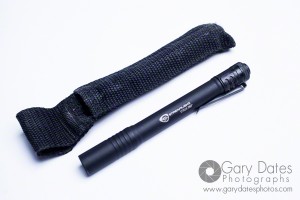 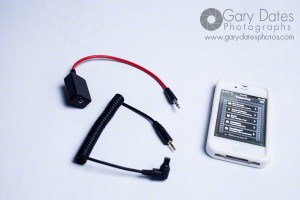 I won’t go into a big thing here cuz I did a video review of Trigger Trap in another blog post. I also made a video on how to use Trigger Trap to pop a speedlight. You can also go to their website. I’ll just say that Trigger Trap is a hardware/software combo that, when used with an iPhone, adds really cool functionality to your camera. The dongle goes for @ $29 and the software is free.

Did you ever want to do long-exposures in bright sunlight? If so, you discovered that you couldn’t stop down enough to get to even a several second exposure. Say hello to the Stop Down ND Filter! The one I bought can go from 2 to 8 stops LESS LIGHT! That allows me to do long exposures in the middle of the day, for that velvety smooth water look, for example. Here’s what it looks like:

You rotate the outer ring to fade down the light……super-easy and it works great. Here’s an example of that dreamy, long exposure water look: 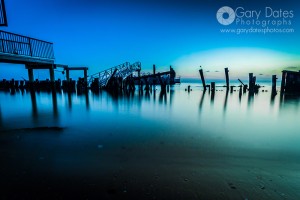 Dave Dugdale did an excellent review of several stop-down filters on his excellent blog, Learning DSLR Video. I got mine at B&H Photo.

Last but not least (and not that cheap either), the Fuji X100S! I love this little thing. I goes fully manual, shoots RAW, and I can take it everywhere. 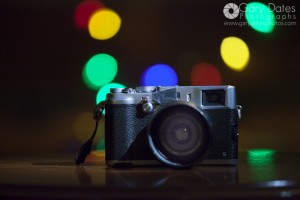 It’s a great low-light performer. I can get good results at ISO 6400!!

I picked this up used at B & H Photo for, well, a lot. It now sells for $899, because Fuji has replced it with the X100T. B&H has a Used department, so its worth checking out. I wouldn’t buy a used camera on eBay cuz you have little recourse if it doesn’t work, whereas B&H has a very liberal return policy.

I’m not really a gear-head. I went through that phase and almost went broke. 🙂 The stuff above has really helped my shooting, so I figured I’d pass it on to y’all. It still comes down to your skill, commitment, and desire to take better images. The gear above only helps if you have a real USE for it. So spend your money wisely and above all, HAVE FUN!