Yup. I admit it. I’ve crossed the line. I don’t think I’ve ever jumped down the rabbit hole (as it were), to THIS extent before. What I’m referring to is the process by which I photographed my old iPhone to sell on eBay. I looked at Apple’s promo shots, and decided I wanted to try to do that too. I thought it would be easy. Mayhem ensued.

FYI, the shot I’m talking about can be seen here. I could’ve easily done what any decent graphic designer would’ve done, which is shoot the iPhone, and then in Photoshop use the Pen Tool create an outline, turn it into a layer mask, and knock-out the phone from the background. Then it’s a simple mater of creating a white background layer. But there are plenty of photographers who can do get the same result in camera. That’s what I wanted to do. You can view a setup that will achieve this type of photo here.

I took a 16″ x 20″ piece of glass and put it on cinder blocks to get it off the floor, on which I’d placed a large white sheet of paper. This paper would provide the pure white background when lit with strobes. I then place the iPhone on the piece of glass. The idea is, you’ve got 2 layers to light; the paper, and above it, the iPhone itself. In theory this didn’t seem so difficult at first. I would take 2 strobes and place them on the floor, each with a 36″ strip bank attached. Then I’d light the iPhone with a 3rd strobe from above. HA!

OMG did I over-simplify this shot! I figured I could shoot hand-held because the strobes would be lighting the whole thing. That was mistake number 1. I completely forgot that the iPhone’s screen is BACKLIT! That meant tat any light I threw at it would cancel the glow from the screen…..and I mean ANY light. OK. I FINALLY created a successful result, as seen here: 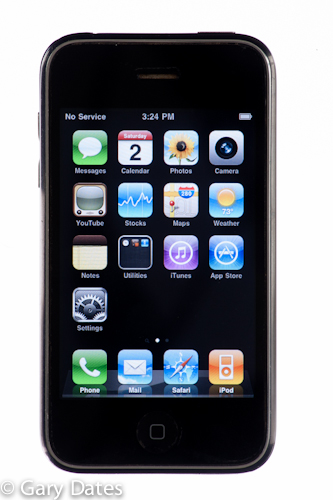 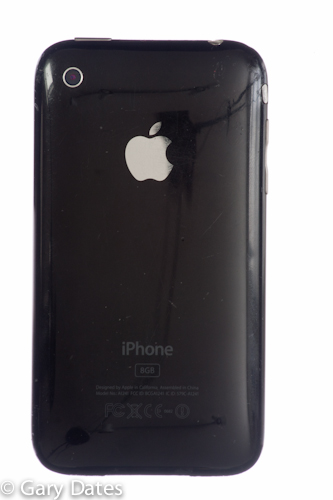 I’ll start at the beginning. The setup was as I described above, using 2 strobes to light the paper and one to light the iPhone from above. It looked like this: 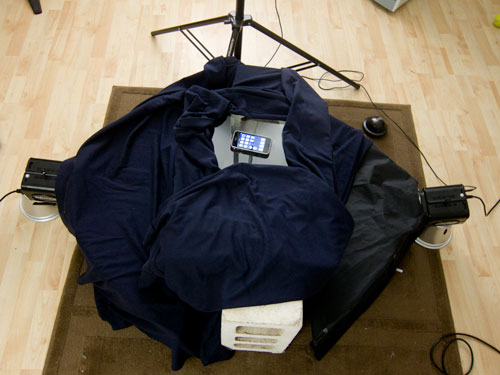 I shot a few hand-held, and realized 2 things immediately which showed me this wasn’t gonna work:

1-I had to get the camera directly above the iPhone, as opposed to a slight angle from the side, in order to prevent any lens distortion in the form of keystoning. I couldn’t lean over the setup far enough to get the camera directly over the iPhone though.
2-I had to eliminate the light from above, and shoot the iPhone in pure ambient light in order to capture the backlit glow from iPhone screen. that mean a really long shutter speed……1 second to be exact…..way too slow for hand-held.

Because of these 2 issues, I had to rig up a way to suspend the camera directly over the iPhone shooting down. Here was the setup (click on it for a larger view):

So I boomed the camera, but obviously I couldn’t look through the viewfinder to take the shot, nor could I focus. Enter Canon Utilities! With this software, you can control the camera from your computer, including focusing, via a USB cable. Of course, in order to see the image in real-time, your camera has to support Live View. which my full-frame 5D DID NOT! So, I had to remove that camera from the boom and replace it with my Canon 40D, which DOES support Live View. (Luckily(?), I had dropped the 40D before I bought the 5D. When I dropped it, a piece of the body broke off right at the point where the on-camera flash is mounted, thereby insuring that I would never be able to sell it for what it was worth. Mind you, it still worked great, so I just kept it as a backup. Hooray!!!…..I think)

So I got Live View goin’ on, and everything was working great. I could move the camera and iPhone into position and see the results in real-time on my Macbook screen…..awesome! I could focus the lens from the Macbook too! Life was good….or so I thought. As it turns out, when I triggered the shutter from the Canon software, the shutter would NOT trigger the strobes!!!! So I had the perfect ambient exposure for the iPhone’s screen, but the paper underneath was black instead of pure white. ARRRRRGGHHHH.

If you’re still with me on this, I’ll wrap it up so you can get back to the real world. The entire process took about 2 hours. FYI, both strobes (Einstein 640s) were set to half power at 320ws each. The flash duration was about 1/1000th of a second…I think…actually I have no idea…for this article let’s just say the flash duration was damn short. The shutter stayed open for 1 second, so the blast of light from the strobes over-exposed the paper to pure white and the ambient light took care of the iPhone. I won’t go into how the iPhone kept going into sleep mode just before I was ready to take the shot…..until I figured out how to disable that feature. Nor will I tell you how many times I had to do the quit-launch-quit-launch dance to re-focus (5). I’ll just tell you that it was a learning experience, and now I know WTF I’m doing so the next time it won’t take nearly as long. Of course, the “next time” would have to include me getting paid….but I digress.

Maybe I’m stereotyping……but I just don’t think a woman would go through all of this BS just to see how to do it; especially if they possess the knowledge to do it in Photoshop in about 15 minutes to get the exact same result. I’m not saying women is lazier…..I’m actually saying women are simply smarter. 🙂