I Shot My Cat

No, not with a gun. I must’ve shot over 500 failed frames trying to take decent photo of my cat, Sweet Pea (yea, Sweet Pea….wanna make something of it?). Why is this so hard? Well, she’s a black cat for one. Black does not reflect light very well, as all you photographers know all too well. Plus, try to get a cat to sit still long enough to compose a decent shot. Go ahead…..I’ll wait. Yea, see? Well, I FINALLY DID IT!!!!!

Here is the final image: 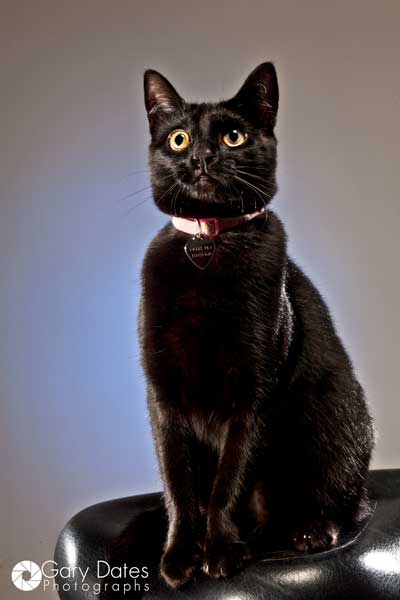 OK, you can like it or not, I don’t care. I love it! Why? Because I finally figured out a lighting setup that gave me enough detail and separation so you can actually SEE her. It was a long, hard road my friends. I’ve been trying for almost a year. No, not every day, but when I had some free time I would attempt to shoot her…..and fail. Again and again.

It took 5 lights to get this shot; 2 mono lights and 3 speedlights. Here was the setup: 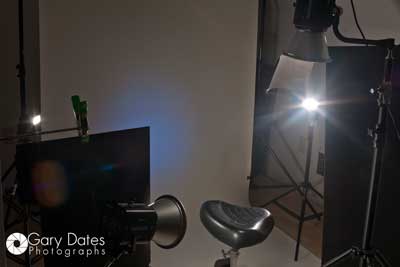 For those of you who like to look at a lighting diagram, here ya go:

I’m sure the above diagram is crystal clear, but I’ll explain anyway: I had the 2 monolights (PCB Einsteins) as fill and key lights respectively. The right Einstein was about 2 feet above Sweet Pea pointing downwards just in front of her, so she was getting hit with a feathered light……the edge of the beam was raking across her. The left Einstein was aimed directly at her. The 2 speedlights were aimed directly at her from the rear, and they supplied a bit of rim light. There was a 3rd speedlight on the floor directly beneath her, with a grid and blue gel that supplied that blue spot on the background seamless.

Did I write down the light ratios? Of course not! I usually take incident meter readings for everything. I didn’t here because I was in a hurry. I know guys like Joe McNally never use a meter. I like to use one, so I can understand how each light is informing the scene. Whatever.

Here’s what I remember: The key light was probably at about 1/2 power…..let’s say f/5.6. The fill light was probably one stop lower. The 2 speedlights were both set at 1/4 power. I didn’t take a meter reading so I don’t know what they added in terms of f/stops. The speedlight on the floor was probably set a 1/4 power, but you loose at least a stop with a gel in there, probably more. I used hard light on everything…..no softboxes or reflectors…..just bare, hard light. I triggered the left rear speedlight with a radio transmitter on my Canon 5D. All of the other lights slaved to that. Why did I choose THAT light to trigger? I don’t know, probably because I hooked up a receiver to it first.

Here is the most important part. My wife Lucille was just off-camera with one of those “bird-on-a-stick” toys, which kept Sweet Pea in one place and occupied. No way could I have done this alone. Sweet Pea can’t stay still for more than a second. That, much more than the lighting, was the key to this shot!

In Lightroom, I added some Fill Light and bumped up the Clarity slider pretty far. That gave her that “sheen” you see. In Photoshop, I added a Brightness/Contrast adjustment layer and added more brightness. That was it for editing.

Look, I really like this photo. No doubt some of you will think I cheated by going into Lightroom and Photoshop. I disagree. I simply used the available tools at my disposal to get the result I wanted. How is that different than in the days of film going into the darkroom and further manipulating the image with filters, dodging and burning, development times, etc.?

Still, you are entitled to your opinion. I just like the photo. But then again I’m biased because I think Sweet Pea looks gorgeous……awwwwwwwww!