I wanted a faster lens, so I just bought a brand new Tamron 17-50mm zoom lens to replace the lens that came with my old Canon Rebel XT. When I replaced it with a Canon 40D, I sold the XT body but kept the lens. The Canon kit lens’ maximum aperture is f/3.5, but is variable to f/5.6 at a 55mm focal length. The Tamron has a fixed max ap (stays the same across all focal lengths) of f/2.8. However, I was curious as to what the difference in optical quality was, if any. So I performed my own “Shoot Out!”

The 2 lenses I’m talking about are, the Canon EFS 18-55mm f/3.5-5.6 AF Wide Angle Zoom lens, and the Tamron Zoom Super Wide Angle SP AF 17-50mm f/2.8 XR Di II LD Aspherical [IF] Autofocus lens. Neither of these lenses is full-frame, which means if I eventually upgrade to a full-frame camera body I will probably get vignetting. I’ll cross that bridge when I get there.

I stipulate up front that my test was not very scientific. I didn’t measure anything. There is no data to compare. I didn’t measure bokeh quality, barrel distortion, or edge fall-off. I simply shot 4 images with each lens and compared the results. My shooting was not rigorous. I didn’t compare in different lighting conditions, nor did I run the gamut of f/stops. Still, the comparison was interesting, and I was able to draw some conclusions. If you’re in a hurry, the Tamron lens won hands-down. Read on to find out why.

Below are 2 images shot at the same focal length and f/stop, cropped at at 100% in Adobe Camera Raw (ACR). I thought it would be appropriate to shoot my favorite lens, the Canon EF 50mm f/1.4 USM AF lens. To avoid any confusion, this lens was just the subject of the photos, NOT part of the test!

To keep things as fair as possible, I changed the f/stop of the Tamron in each shot to equal that of the Canon, even though the Tamron lens is capable of maintaining the same max f/stop at all focal lengths. All images were shot in the same light at the same exposure. Click on either image to enlarge:

I think you can clearly see that the Tamron image is richer in the shadows and the highlights. I was a bit surprised by this. It appears that the Canon lens produces duller, flatter images. Let’s look at 2 more images shot at 50mm cropped in to 100% in ACR.

Once again, the Tamron image is richer in the shadows and highlights. Let’s take a look at the histogram for each image: 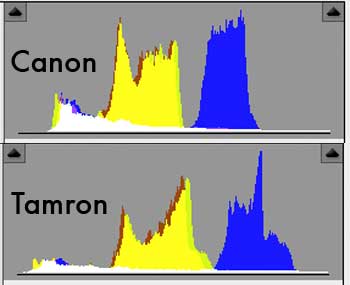 As you can see from the above histogram, the image shot with the Canon lens has a more “condensed” histogram, and is lacking in both shadow and highlight detail. The histogram for the Tamron-shot image is broader and displays MUCH more shadow and highlight detail. I didn’t alter any settings in ACR. I simply took a screen-grab of the histograms for both RAW files. The difference is pretty dramatic, wouldn’t you agree?

I was expecting a dramatic difference in sharpness between these 2 lenses. The Tamron lens did produce sharper images than the Canon lens, but not by much. Instead, I was surprised to find out how degraded the images that were shot with the Canon kit lens were in shadow and highlight detail. Since I don’t know that much about internal lens construction, I have no clue as to why the contrast is so much better on the Tamron lens. However, I don’t really care. I was interested in a visual comparison, and that’s what I got. At $459, the Tamron lens is not exactly cheap, and since the kit lens from Canon adds about $100 to the cost of the camera body, the Canon lens is much less expensive. It turns out that Canon makes a lens that specs very close to this Tamron lens; the Zoom Super Wide Angle EF 16-35mm f/2.8L II USM Autofocus lens, which sells for $1520 at B&H Photo. I would love to do a comparison test with this lens and the Tamron, but at that price it ain’t gonna happen. It is a fulI-frame lens, but still, I am VERY curious as to what you’re getting for $1000 more!

No surprises here. The Tamron is better. With a fixed maximum aperture of 2.8, this lens is plenty fast. It is also sharp and produces images with great contrast. Honestly, if you are in the market for a DSLR, just buy the camera body. The lenses that come with the lower-priced cameras are not very good.

The latest trend is to sell these camera bodies with stabilized lenses. On the Canon side, this is called “Image Stabilization”. On the Nikon side it is called “Vibration Reduction”. This is a good thing, because stabilized lenses can get you a few stops more speed, so you could probably get a reasonably sharp image hand-held at 50mm at around 1/15! Of course, you’ll be getting a reasonably sharp dull, flat image.

As it happens, you can buy the exact same Tamron lens I used for this test with stabilization for @$200 more. Personally, since I can’t afford a lens that is both fast AND stabilized, I’ll take optical quality and speed (maximum aperture) over stabilization in the 17-50mm focal length range. For a telephoto lens, I feel you are wasting your money if you DON’T buy a stabilized lens….but I digress. The bottom line is, buy the camera body, forgo the kit lens (even with stabilization), and buy the Tamron Zoom Super Wide Angle SP AF 17-50mm f/2.8 XR Di II LD Aspherical [IF] Autofocus lens instead.

A great, mostly-objective resource for Canon and Nikon stuff is Ken Rockwell. He is MUCH more thorough than I, has access to a ton of photo equipment to test, and has been testing stuff for years. Nonetheless, I think I did OK for my first try! At least I feel like I didn’t waste my money on this lens.